The applications include Questions and Answering (Q&A) system that analyzes general texts such as newspaper articles, as well as Information Extraction (IE), Machine Translation (MT), Summarization and Information Retrieval (IR) systems that meet variety of NLP applications. For example, Q&A system provides information that one wants to know or extract from articles.  Those information can be categorized into fixed number of classes with hierarchies; we designed it in the Extended Named Entity Hierarchy, Q&A system or IE system assuming that information one wants know is basically in a form of noun phrase with specific names and numerical values. In other words, it is not a word that expresses general concept or class, but rather a name of concept or thing that can be pointed out physically.

The Extended Named Entity Hierarchy is divided into three major classes; name, time, and numerical expressions (these three classes are the same as NE hierarchy defined in the MUC [Grishman1996], IREX [Sekine2000] project).  Based on our observation, we know that one’s question on a specific matter often fits in one of these categories.  Having these three classes at the top of the Extended Named Entity Hierarchy, Q&A system and IE system are created taking into account the concepts and words that are generally considered as common knowledge in usual newspaper articles and encyclopedias.

We defined the classes based on a criterion that frequently occurring words and noun phrases should be categorized into a class according to its meaning and usage.  In practice, the following methods are used to develop the hierarchy. 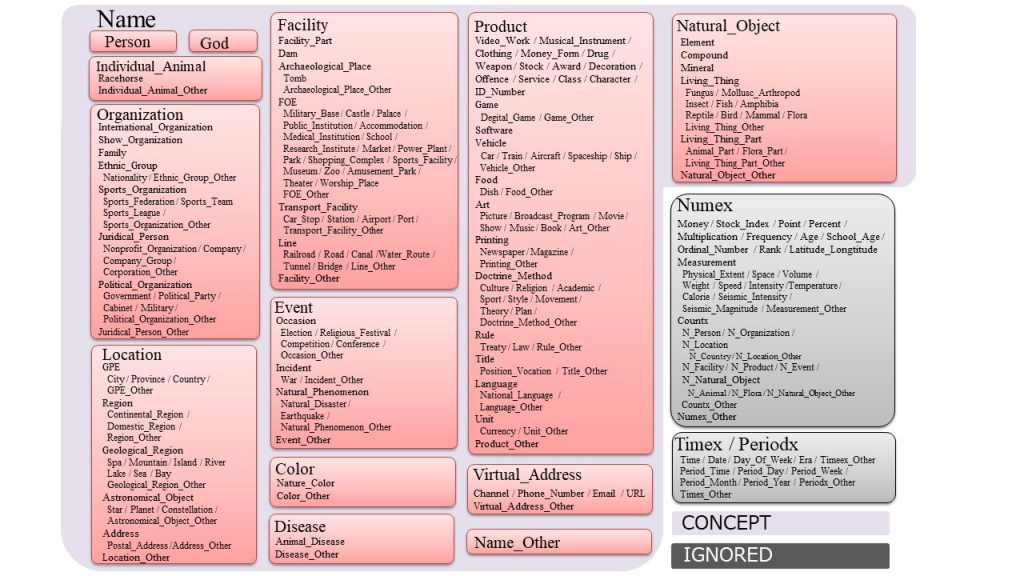